As we turn our calendars to March and the coming of spring weather, we can look back at a weather phenomenon that many Wisconsinites experienced in January & February. 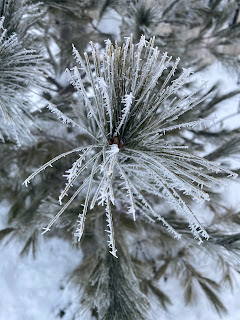 There were several weird-but-wonderful FROST events early in 2021 in various locations throughout our State of Wisconsin.  Frost is actually water vapor which turns to a solid.  Typically, areas that have high humidity and lots of fog are prone to heavy frosts.

National Geographic online offers the following explanation: “Frost forms when an outside surface cools past the dew point. The dew point is the point where air gets so cold, the water vapor in the atmosphere turns into liquid. This liquid freezes.  If it gets cold enough, little bits of ice, or frost, form.  The ice is arranged in the form of ice crystals.”

Frost formations can be quite different from each other; there is rime frost, and hoar frost as well as the one-dimensional frost that forms on a single-pane window. Each type of frost has different characteristics.   Hoar frost usually forms on clear, cold nights with minimal air movement (virtually no wind); it sometimes coats the edges of foliage and branches and is white and bright! 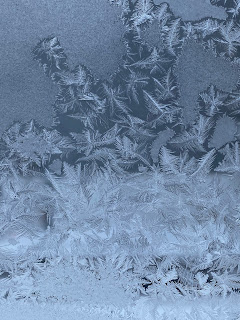 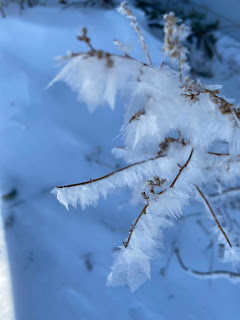 Rime frost forms quickly in cold wet climates; it can even form during windy weather. It has feathery ice crystals and clings to branches… it’s another form of frost that beckons you to take pictures.

HINT: Frost photo ops can disappear quickly; when wind speed increases or sunshine warms the air, those unique frosty-and-glittery photos can be lost.  When you wake up to fresh frost formations, grab your phone or camera and enjoy the outdoors!

(When you come back indoors, enjoy some tea or hot cocoa and check on line for more info on frost.  Google on “images” for hoar frost and rime frost for more examples. Breathtaking!)

Posted by Laurie McGraw at 8:18 PM