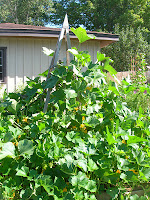 Mini pumpkins grow nicely in a home garden and produce tiny orange bits of joy in late summer, early fall.  Though these pumpkins are just a few inches in diameter, they grow on large vines which require significant space in your garden.  In June 2012, I planted more than twenty mini pumpkin seeds (from the genus Cucurbita)  and anchored a substantial wooden trellis for their support .  Plants were watered (at the base) frequently due to prevalence of scorching summer days during this growing season, and the seedlings thrived.  Soon the tiny tendrils along each vine began to grab onto the trellis and moved onward and upward.


During drought, some plant species will abort their blossoms and fruit in order to preserve the primary plant, I wasn’t sure these vines would produce the tiny pumpkins I love.  Luckily, the vines produced a plethora of vivid yellow blossoms, and bees continuously worked among the pumpkin flowers.   I was pleased our hearty vines “gave birth” to four dozen delightful mini pumpkins in AUG/SEPT.


If you are thinking about growing mini pumpkins next season, consider the space required for a successful crop.  Even with a vertical support available, tenacious vines also traveled horizontally and encroached upon other plants in their vicinity.  Also, since pumpkins are open pollinated, you should not plant other varieties of pumpkin or squash nearby.  (Long ago I made this mistake and the unsightly “mutant” pumpkins produced were the result of cross pollination.)


Growing mini pumpkins is especially fun for children since they watch the progression of growth, and one day they can harvest the tiny orange bits of joy. 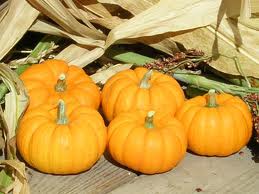 NOTE:  If you do not have significant space available in your home garden, just stop in at Lammscapes in Jackson, WI to buy your decorative and delightful Jack-Be-Little mini pumpkins!  They are only $1 each and can be used in your autumn décor by themselves, or along with an assortment of winged gourds and funky pumpkins,  available for you during October.