'Tis the Season.... for Japanese Beetles

With the onset of hot summer days, our trees, shrubs and flowers are lush and lovely, beckoning us to savor the beauty each provides for our viewing pleasure.
Of course, hot summer days also mark the arrival of adult Japanese beetles to our landscapes; these insects with their voracious appetites do NOTHING to enhance our summer gardening experiences! 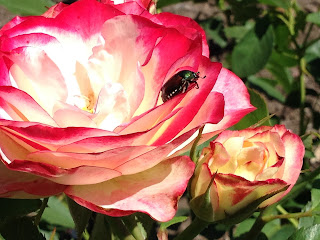 Adult Japanese beetles (Popillia japonica) can decimate blooms and foliage of more than 300 species of plants (they cannot be considered picky eaters!)  Some of their favorite deciduous trees are in the genus Tilia.   The foliage of Tilia cordata (little leaf linden) and Tilia americana (American linden or basswood) are extremely attractive to adult Japanese beetles.   However, I also encountered an infestation on the thick foliage of Quercus bicolor (swamp white oak).  These beetles can skeletonize foliage on ANY plant they visit from June through August!

The genus Rosa provides another culinary delicacy for these adult insects; in the photos I took at a botanical garden this week, the beetles were congregating on Rosa floribunda ‘Cherish.’  Rose bushes provide a perfect gathering place where they meet and mate all summer long!  These gorgeous ‘Cherish’ blooms have no defense against the ravages of a Japanese beetle infestation.

Even the buds are a favorite gathering place for these little destroyers…
“Little” is a relative word.  Popillia japonica is much larger than a lady beetle or ladybug.  Measuring 3/8” (10mm) long by 1/4" (7mm) wide, Japanese beetles sport iridescent rust-colored wings and barbed black legs. Beneath their wings a patch of iridescent lime green appears, but it’s not apparent when wings are closed.  Japanese beetles are classified as arthropods in the order of Coleoptera.   Adult females often deposit their eggs in lush, irrigated turf throughout summer and early fall.   The larvae, when hatched, feed upon turf roots causing brown, dead patches of grass.  These larvae are “C” shaped white grubs with brown heads. 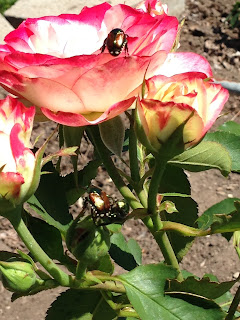 Originally from Japan, in the early 1900’s the Japanese beetle was introduced into the USA accidentally from plants brought to NJ.  The beetles have found ways to migrate to other states, and in 2015 for the first time, they found my raspberry patch in Southeastern Wisconsin.  I captured and drowned dozens in soapy water (the preferred method for organic gardeners to kill this little destroyer.)  However, they ate most of the tender buds, preventing berries from developing.   Result:  a scant yield of twelve raspberries from nearly one hundred canes! 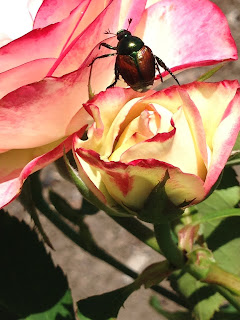 Keep containers of dish soap/water solution in covered containers in your garden areas.  Scout for Japanese beetles often; new migrations can arrive daily.   Drown in soap water—do not “squish” them— or a pheromone is released that will attract more beetles to your garden!