Perennials have a reputation… for dying back in the fall… for sending up new foliage each spring… for blooming year after year.  Most perennials live up to this reputation, but this does not mean they are a permanent addition to your backyard garden!

Some perennials (like Columbine) are considered short lived.  They may bloom for a few years, coming back on the same root system but eventually they will die.  Since Columbine is a prolific re-seeder, you can allow the beige seed pods to fully dry and drop their tiny black seeds into the same patch.
(Often new plants will emerge from these seeds the following year, and you will have a thriving Columbine patch consisting of new seedlings.)

Some perennials can be be divided periodically so you can enjoy the original plant, as well as share a division with a friend or neighbor.  An example of this is Siberian bugloss—with its heart shaped leaves and bright blue flowers in June—it handles division and transplanting very well. 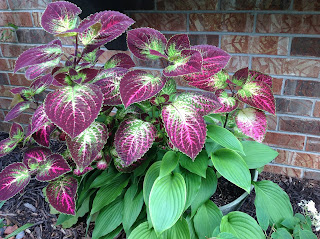 My favorite way to display a not-permanent perennial is to include it in a container arrangement.  A lime green hosta pairs nicely with a grape-and-lime colored coleus; both prefer a mostly shaded location, so they are quite compatible growing in one pot all summer long.
As autumn approaches, simply take cuttings indoors for the coleus plant, and place in water; next, return the hosta to your backyard garden so it can set roots before winter. 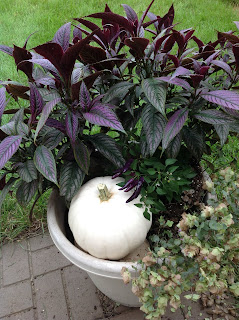 Posted by Laurie McGraw at 10:43 PM No comments: